While I do not get many hits I would encourage you to leave a comment positive or negative.  Just no more death threats please, my wife does not like those.
Posted by trollsmasher at 9:37 PM 2 comments:

This week North Korea announced a missile test to put a satellite in orbit in what everyone know is a ballistic missile test that has the world up in arms.  What I do not think anyone has brought up is that it will also be a test for the Iranians. The North Korean No-Dong and Taep'o-dong series is being developed in
parallel with the Iranian Shahab series of long range missiles.  The No-Dong and Shahab 3 have a range 1350km/839 miles with a payload of 2550 lbs.  The longer range Taep'o 1 and Shahab 4 when using three stage rocket have a range of  2475km/1538 miles with a 500lbs payload.  However dropping to two stage the range is still 2000km/1243 miles with a 1000 kilogram/2205 lbs payload which is much more useful in military terms.  It is believed that Korea and Iran are testing the Taep 2 and Shahab 5 with a 3500km/2175 miles range with a 1000kg/2205 lbs payload.

While both countries latest missiles have ranges greater than what I have listed their throw weight at those ranges is small.  Somewhere in the neighborhood of 500 lbs.  While useful in a bomb not so much which these weapons can only target cities.

The FAS has a great overview of both countries missile programs. 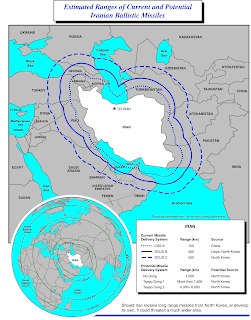 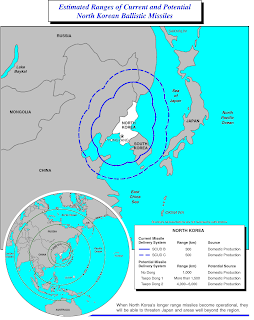 Posted by trollsmasher at 11:10 PM No comments:

I had opined earlier that without serious outside help which the world would not give the Syrian rebels would more than likely lose.  It appears that the assault on the rebels has begun and they are losing and losing badly.  Syria has access to just too much firepower and man power.  With Iran and Hezbollah both helping plus around a 300,000 man well armed and trained (to fight Israel army) military.  Air power alone is not enough to help them as the first several hundred missions will be to roll back Syrian air defenses which are significantly better than Libya's or even Iran during the first Gulf War. Also the Syrian's have a significant chemical (verified) capability combine this with Iran being able to hit any target it wants in the Middle East with conventional rockets attacking Syrian directly becomes a thorny issue that will have to have substantial Arab backing.  Go back to the poll from yesterday that view the U.S. as the 800lbs gorilla in the room and it is doubtful the Arab street would take well to another Western invasion.

The rebels just do not have the firepower or a sanctuary like the Vietnamese or the Taliban currently have to sustain a campaign against the Assad government.  The rebels are right in front of Syrian firepower with no way to flee from it.  Unless Turkey wants to step up and with its new found friendship with Iran it ts doubtful the Syrian military and security services are just too strong.
Posted by trollsmasher at 8:25 PM No comments:

A poll reported by al JazeeraThe U.S. which has done nothing but support the Arab Spring, militarily help overthrow one dictator, and politically another (who was an ally) is still viewed less favorably than the realy enemy at the door step Iran. "73 per cent of those polled see Israel and the US as the two most threatening countries. Five per cent see Iran as the most threatening."  This is a telling statement that I think comes from two things year of Arab countries blaming the West particularly the U.S. on all of their woes. Crops were bad the U.S. caused it, you cannot get a job the Jews did it. This is the kind of things the Arab governments tell their people to deflect the blame from themselves.

Another telling finding is "A relatively high 36 per cent wouldn't support those they disagree with in their political platform to take power, a percentage that doesn't bode well for democracy".  This tells me there will always be revoluts or the threat of them no matter who comes to power or how.

If it were not for the oil I would be all for letting this region rot in its own igonorance.  The problem with this is with their very high percentage of military aged males it makes this region ripe for causing trouble if something or someone where able to unite the Arab nations like the poll suggests the people want that could cause serious trouble.  We would always have to keep an eye on them.

We need to exploit every oil field and source that we have and work very quickly on other types of cheap energy.
Posted by trollsmasher at 7:08 PM No comments:

Why is it only our Navy is under threat

Naval spending by the six Gulf Co-operation Council (GCC) states has markedly increased in recent years as the region seeks to build upon maritime security...From Janes
Posted by trollsmasher at 6:44 PM No comments:

Russia who does not have the money to spend is dumping hundreds of billions of dollars into their military.  Putin has made this a priority to the tune of $770 billion US.  Putin vowed to deliver an "effective and asymmetrical response" to the North Atlantic Treaty Organization's plan to cast a missile-defense shield over Europe while thoroughly overhauling the army's ability to confront modern threats.

Yes we needed to cut our bloated defense budget but cut it smartly not amputate it that is the wrong approach. The administrations pledge to cut our nuclear stockpile to 300 not smart. Cutting back the number of ground units even dumber.  Meanwhile the administration claimed it is going to increase naval and air capabilities it cut the F-22 and F-35 programs.  The F-35 is vital for the Air Force, Navy, Marine Corps and several of our allies again a mistake.  However we are getting exactly what he promised in 2007 when he said he would question the defense review, cut back new weapons development and cut back the nuclear force.  Well good sir in probably one of the most unstable times in recent history you are cutting the force of the world's police force.

Posted by trollsmasher at 8:17 PM No comments:

If you like what you read here click on my ads as that is what supports this little blog.

From the Black Lagoon

The Religion of Peace???